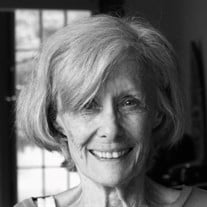 Virginia MacQueen Ford (Ginny), age 86, passed away peacefully surrounded by family at the home of her daughter Kathy Ford in Worthington, MA, where she had been living since April 2019. She is survived by Kathy and her son Rob (Samantha) Ford; and five grandchildren Molly, Ben, Charlie, Luke, and Hugh. Born in Watkins Glen, NY and raised in Rochester, she lived and raised her family in Brighton before moving permanently to South Bristol in 1984. Ginny received her bachelor’s degree from Beaver College in 1956, where she was President of the Student Government and on the Board of Trustees. Amid master’s coursework in Urban Studies at the University of Rochester in the late 1970’s, she was pulled into her first entrepreneurial venture which became Ford Research Services in 1980 and was acquired several years later. Along the way, she was a leader in myriad community organizations and businesses. She was President of the Junior League of Rochester from 1968-1976, a moderator for the Arbitration Association, and served on the Boards of the Chamber of Commerce, Rochester Philharmonic, GEVA, the National Women’s Hall of Fame, and the Curtis Burns Corporation. In 1982 she won the Athena Award as Woman of the Year. Her acceptance speech for the award was entitled, “You can have it all, you just can’t have it all at once.” That title embodied Ginny and her approach to life. Her talents and passion for ongoing learning inspired all who spent time with her. Devoted to her family, both immediate and extended, she will always be remembered for orchestrating the annual Christmas party. Accompanying on piano and guitar, she encouraged all the cousins to perform solo and group numbers for the show. She read several books a month her entire life, traveled extensively, and found time to design and cultivate beautiful gardens. In her sixties, she taught herself pottery, built a studio dedicated to the craft, and with her characteristic generosity, invited friends and family to share her passion for making beautiful bowls and vessels. An equestrian in her youth, she picked up golf and skiing later in life, and then channeled her energy into completing challenges such as Outward Bound’s Wilderness Survival Training in 1989 and the Walk Across England in 1993. She led while encouraging others, was an inspiration for all she engaged with, and shared her unflagging spirit offered in love. Her memorial service will be held in Bristol/Naples NY in mid-summer 2022, details to be announced. Interment with be at Coye Cemetery at that time. DROZDAL FUNERAL HOME of Northampton, MA has been entrusted with her services. For more information, or to leave the family a personal condolence, please visit Drozdalfuneralhome.com.

Virginia MacQueen Ford (Ginny), age 86, passed away peacefully surrounded by family at the home of her daughter Kathy Ford in Worthington, MA, where she had been living since April 2019. She is survived by Kathy and her son Rob (Samantha) Ford;... View Obituary & Service Information

The family of Virginia "Ginny" (MacQueen) Ford created this Life Tributes page to make it easy to share your memories.

Send flowers to the Ford family.