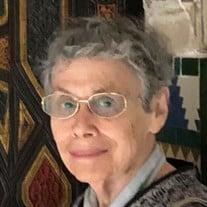 Rose Lander née Getner died on June 13 after a long and valiant battle with cancer. She was born in 1930 in San Francisco to furrier Alex Getner and his wife Jennie, a skilled knitter, tailor, and competitive swimmer, which Rose inherited. After moving to the Bronx, NY, she graduated from the High School of Music and Art and Hunter College with degrees in education and music. Rose then moved to the Bay Area and subsequently Los Angeles, where she taught kindergarten in the public school system. She was an avid participant in the local chamber music scene. One of her musician friends introduced her to her future husband, Yechiael. Because the couple’s first date coincided with St. Patrick’s Day, they continued to celebrate the holiday throughout their marriage with gimlets and grasshopper pie. Rose trained as a music teacher at UCLA and later as a Suzuki violin teacher with Shinichi Suzuki, Louise Behrend, Samuel Applebaum, John Kendall, and William Starr. When Rose and her husband moved to Northampton, MA, she taught elementary school and later opened a private Suzuki violin studio, which continued until May 2021 when she became unable to continue her Zoom lessons remotely. From 1970-1973, Rose also created and taught a volunteer violin program in the Northampton public school system. Her violin studio was filled with photos and paintings of and by Dr. Suzuki as well as her students. Students benefited from her personal interest and talent for reaching and inspiring each and every one, regardless of age or ability. Rose was joyously proud that many of her students went on to pursue professional music careers. She passed on her love of music to her two children, both of whom are amateur musicians. She always believed that music was the transcendent language of the heavens, which spurred her to play religious music in churches and at weddings throughout her life. Rose was also an avid chamber musician. Hosting chamber music in her home for most of her life, she treated players to a gourmet coffee break with homemade treats. She attended chamber music workshops annually and was an esteemed regular at summer chamber music workshops. Her exhaustive knowledge of quartet music astounded her colleagues and was only surpassed by her love of the genre, which she felt was the most intimate and perfect musical form. She also performed with the Orchestras of Smith College and Amherst College, and Project Opera (later renamed the Commonwealth Opera Company). Many organizations benefited from her energetic leadership: The Commonwealth Opera Company, the Western Massachusetts Suzuki Organization, the Western Massachusetts Suzuki Summer Institute, which she founded. Her dedication garnered several awards, including the Seventh (2009) Nathan Gottschalk Memorial Award from the Pioneer Valley Symphony Orchestra and the Lander-Grinspoon Academy of Northampton’s 2015 Community Leadership Award. Rose and Yechiael combined their love of opera with their passion for international travel. With the International Council for Cultural Exchange they traveled to Italy, Russia, Scandinavia, France, the Czech Republic, and Austria. They also toured Costa Rica, the UK, Ireland, Scotland, Canada, and Spain, and lived in Israel for 6 months. For many years, she and Yechiael attended Broadway plays as well as the Shaw Festival in beautiful wine country: Niagara-on-the-Lake, Ontario. Rose was also an avid reader and theater aficionado, auditing courses at the Five Colleges. Rose was deeply committed to progressive politics, for which she regularly volunteered, and she campaigned for and generously supported numerous social causes, like Planned Parenthood and NARAL. She organized fundraising concerts for Vietnamese refugees, the Sisters of St. Joseph, the Western Massachusetts Suzuki Summer Institute, and the Rotary Club. Rose was instrumental in establishing one of the Pioneer Valley’s first chavurot, a small group of families who celebrated Jewish holidays together and became an extended family. Despite resisting the title given to rabbinic spouses, “rebbetzin,” Rose supported and complemented her husband’s rabbinic career at Smith and Amherst colleges and the Jewish Community of Amherst with home hospitality and avante-garde kosher cooking. Throughout her life, she welcomed guests to their art-filled Victorian home in Western Mass, providing a home-away-from-home and helping students organize and prepare holiday meals as well as to establish the kosher kitchen at Smith College. She introduced California cuisine to the Pioneer Valley long before anyone knew what it was, and was an early adopter of convection baking. Rose will be remembered for her warmth, joie de vivre, beaming smile, and keen memory for jokes. Her friends fondly nicknamed her the “energizer bunny.” She brought laughter and joy to so many, even in her final days. She is survived by her husband of 63 years Yechiael, children Jaime (né Jeremy) and Shira (David), grandchildren Zachary (Elana), Maury (Jamie), and great-grandchildren Talia and Max. In keeping with Jewish tradition, please do not send flowers or plants. Donations may be made in Rose’s honor to Planned Parenthood League of Massachusetts or Amirah, Inc. The funeral will be Tuesday at 2:30 PM at the Congregation B'nai Israel, 253 Prospect St., Northampton with burial to follow in Congregation B'nai Israel Cemetery. The family will be sitting Shiva at the home of Yechial and Rose, Loomis House, 20 Bayon Dr. S. Hadley, MA, Tuesday, Wednesday, and Thursday evenings beginning at 7 p.m. DROZDAL FUNERAL HOME of Northampton has been entrusted with her services.

Rose Lander née Getner died on June 13 after a long and valiant battle with cancer. She was born in 1930 in San Francisco to furrier Alex Getner and his wife Jennie, a skilled knitter, tailor, and competitive swimmer, which Rose inherited. After... View Obituary & Service Information

The family of Rose B. Lander created this Life Tributes page to make it easy to share your memories.

Send flowers to the Lander family.