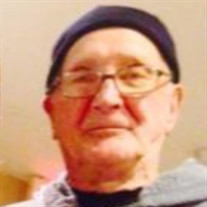 Chesterfield – Roger T. Kellogg Sr., 80 of Chesterfield, passed away unexpectedly on Saturday January 4th. He was born in Northampton on March 22, 1939 to the late Walter and Hazel (Munson) Kellogg Sr. Roger was a graduate from Smith Vocational and Agricultural High School where he excelled in the Auto Body Shop. After high school, he immediately went to work at Pro-Brush; where he worked for 52 years as the Maintenance Director. In that 52 years, he never took a day off. This proved, that his hard-working ethics and dedication was shown thru his beautiful, well-manicured lawn and gardens. He was a Jack-of-all-Trades; from fixing anything, building various things, and working on cars. Roger was a caring, generous man and would always lend a helping hand to anyone in need. He was also an avid Red Sox and Patriots fan; never missing a game. But, most of all he adored his family, he will be sadly missed by all who knew him. He is survived by his son; Ronald and his wife Barbara of Easthampton, his brother; Richard and his wife Celia of Westfield, his grandchildren; Amber, Thomas, Amanda and Marisa Kellogg, 8 great-grandchildren, his brother-in-law; Ervin Weeks, sisters-in-law’s; Bonnie, Patricia, and Julia Kellogg, also several nieces and nephews. Besides his parents, he was pre-deceased by his wife; Roseanne (Ozzolek) Kellogg, his sons; Joseph, Donald, and Roger Jr., his brothers; Walter, Charles, and Robert, and his sister; Barbara Weeks. There will be calling hours on Sunday, January 19th, 2020 from 2 PM – 4 PM at the DROZDAL FUNERAL HOME, 120 Damon Rd., Northampton. A Memorial Service will immediately follow at 4PM. Burial will be private, and at the convenience of the family. For more information, please visit Drozdalfuneralhome.com.

Chesterfield &#8211; Roger T. Kellogg Sr., 80 of Chesterfield, passed away unexpectedly on Saturday January 4th. He was born in Northampton on March 22, 1939 to the late Walter and Hazel (Munson) Kellogg Sr. Roger was a graduate from Smith... View Obituary & Service Information

The family of Roger T. Kellogg Sr. created this Life Tributes page to make it easy to share your memories.

Send flowers to the Kellogg family.