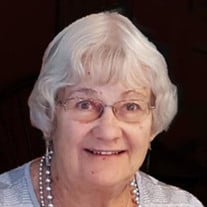 Martha Ann (Pipczynski) Boisvert passed away on November 15, after a long, courageous battle with a very rare disease, Amyloidosis. She peacefully left this earth with her husband and her three children at her side. Martha was the sixth of the ten children born to Adolph and Mary (Koncick) Pipczynski, at home, at their home at Stockwell Road in North Hadley. Martha attended Sacred Heart Grammar School in Northampton and graduated from Hopkins Academy, class of 1966. She attended and graduated from Mount St. Mary College in Hooksett, NH. After graduation, Martha worked for the Commonwealth of Massachusetts as a social worker, Raymond Insurance in Northampton, and UMASS Foundation in Amherst. During this time, Martha and husband John raised their three children, Ginny, Johnny and Joey. Martha was a communicant of Most Holy Redeemer Church. There she taught Confirmation classes for years and was a reader, a member of the Rosary Sodality and a member of Parish Council. Martha’s proudest accomplishment was as a cofounder of North Hadley Sugar Shack twenty-five years ago along with her sons. She could be seen there for years baking her pies, along with her daughter. Her favorite pie was her peach pie. She was also famous for her maple munchies during sugaring season. Her workroom became Babcie’s Kitchen. Martha not only baked, she helped teach and educate local school children and visiting families the process of making maple syrup and maple candy. People knew that this is where she could be found for socializing. As her health declined, Martha began teaching her granddaughters her techniques so they could carry on her legacy. The North Hadley Sugar Shack was built on her parents’ farm, land she grew up and played on as a kid. Martha was an avid reader and loved sudoku puzzles. She made great memories on trips with her sisters and her family. Ridin-Hy, trips to the Dudley and Rhode Island cottages, camping at Groton, and visits to Argyle will always be remembered by her kids and grandkids. Her hobbies included collecting nativity sets and at latest count she had over 100. She was devoted to her kids, grandkids, and siblings. Martha will be missed by her husband John, whom she married 51 years ago and her children Ginny Fil (Tom), Johnny (Bridget) and Joey (Shelly). She was very proud of them and her eight grandchildren: Trevor, Felicia and Dylan Fil, Hailey and Cole Boisvert and Joseph, Austin and Tessa Boisvert, all of Hadley. Martha leaves her siblings and spouses: Duff and Clara Pipczynski, June Suleski and Richard Waido, Bernadette Wyman, Yadja and Bob Bacher, Joe and Pat Pipczynski, Benjie and John Tessier, Tony Pipczynski, and Fran and Janet Pipczynski. She also leaves her sister-in-law Pat Pipczynski, sister-in-law and brother-in-law Esther and Carl Growhoski and sister-in-law and brother-in-law Margaret and Leslie Phipps. Martha will also be missed by numerous nieces, nephews, grand nieces, and grand nephews. She was predeceased by her parents, Adolph and Mary, and her brother John (Jackie), brothers-in-law Warren Wyman and John Suleski and sister-in-law Deb Pipczynski. Calling hours will be held on Thursday, November 19th from 4 to 7 pm at the DROZDAL FUNERAL HOME, 120 Damon Rd., Northampton. Funeral and burial will be private. The family would like to send a special thank you to JM Cycz and the doctors and nurses at Baystate Medical Center in Springfield for the amazing and compassionate care they provided Martha during her stay. In lieu of flowers, donations make be made to Holy Rosary Cemetery, c/o Most Holy Redeemer Church, 120 Russell Street, Hadley, MA 01035 or the Amyloidosis Foundation, 7151 N. Main Street, Suite #2, Clarkston, MI 48346. Due to Covid-19, masks and social distancing are required at all times, we also ask during your visit with us to please keep condolences with the family brief. For more information, or to leave a message of personal condolence please visit Drozdalfuneralhome.com

Martha Ann (Pipczynski) Boisvert passed away on November 15, after a long, courageous battle with a very rare disease, Amyloidosis. She peacefully left this earth with her husband and her three children at her side. Martha was the sixth of the... View Obituary & Service Information

The family of Martha A. Boisvert created this Life Tributes page to make it easy to share your memories.

Send flowers to the Boisvert family.