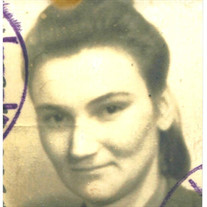 Maria (Sajdlowski) Peret, 97, of Northampton, passed away on Wednesday, January 20, 2021 at her home surrounded by her loving family. She was born in Stare Miasto Lezajsk, Poland to the late Joseph and Paulina (Pustelny) Sajdlowski. Maria was raised working on her family farm alongside her sisters and brother before she immigrated to the US. Maria had fond memories of her brother Michael, who was a house builder who would sometimes leave the farm for many months working around the countryside. Maria would sometimes travel with Michael, which she enjoyed very much. When Maria was a young child, she would often polish her father’s boots on Sunday, so that they could go horseback riding together. At the age of 19 she was assigned by the German occupant of Poland, to working in Berlin, Germany for a wealthy family as a housekeeper. After several months because Berlin was being bombed, Maria and the family she worked for had to move to Austria. There she met Walter Peret, who later would become her husband. He worked on a horse farm as a horseback-riding instructor and farm manager. When WWII ended, Maria and Walter moved to a refugee camp where they married. While living in Austria, they had two children: Walter and Helga. They originally had intentions of immigrating to France, but Helga became very sick and they had to delay the trip. With ships coming from various countries to help war refugees, Maria, Walter, and their two children ended up boarding the USS General Hershey and headed to the US. In a couple of weeks, they arrived at the port of New Orleans. They ended up living in Mississippi for a few months, where Maria had a job picking cotton and Walter drove a tractor on the farm. In 1950 the family moved to Hatfield and lived with relatives and then finally settled in Northampton a few years later and purchased their home. It took several years to renovate their home and during those years Maria and Walter raised six children. Over these many years, Maria and Walter would communicate by letter with their family back in Poland and were always trying to help them out by sending packages. Maria loved family holidays, she was an excellent Polish cook, making breads, pies, Ponchkies, and her hobbies included knitting and gardening. Anyone that visited her home, were always pleasured with her excellent Polish cooking and drink. Maria worked in food service for Smith College for 17 years, after she had raised her children. Maria was an active member in the Woman’s Club of the former St. John Cantius Church and a devout church goer and later a member of the St. Elizabeth Ann Seton Parish. After Maria retired, she travelled back to Poland several times to visit her family, along with members of her family. Maria is survived by her children; John and his wife Sandra of Chicopee, Roman and his wife Debra of Westfield, Walter and his wife Judy, Helga Nielsen and her husband Scott of Easthampton, Marion Peret of West Springfield, her grandchildren; Timothy and Keven Peret, Alexandra and Christopher Nielsen, Michael, Priscilla, and Jacklyn Peret, 3 great-grandchildren, and several nieces and nephews. Besides her parents, she was predeceased by her loving husband of 46 years Wladyslaw “Walter” Peret, before his passing in 1991, her daughter Janina “Jean” Peret, and her siblings; Michael, Stephania Patruska, Anielya Waskiewicz, Anna Baj. All services and burial will be private. DROZDAL FUNERAL HOME of Northampton has been entrusted with her services. Maria’s family would like to extend their appreciation to the caregivers that were involved in the care of their mother toward the end of her life. In lieu of flowers, donations may be made in Maria’s memory to the St. Elizabeth Ann Seton Parish, 85 Beacon St., Florence, MA 01062. Due to Covid-19, masks and social distancing are required at all times. For more information, or to leave a message of personal condolence please visit Drozdalfuneralhome.com

Maria (Sajdlowski) Peret, 97, of Northampton, passed away on Wednesday, January 20, 2021 at her home surrounded by her loving family. She was born in Stare Miasto Lezajsk, Poland to the late Joseph and Paulina (Pustelny) Sajdlowski. Maria... View Obituary & Service Information

The family of Maria Peret created this Life Tributes page to make it easy to share your memories.

Maria (Sajdlowski) Peret, 97, of Northampton, passed away on...

Send flowers to the Peret family.