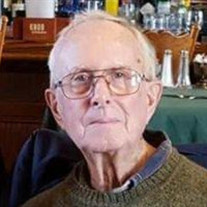 Leonard E. Day Jr., 86, of Westhampton, died on May 15th, 2020 of health complications. Leonard was born in Northampton, on July 3, 1933, to the late Leonard E. Sr., and Margaret J. (Shelkey) Day. Leonard was a graduate of Northampton High School. He joined the Air National Guard and attended the Armorers School. He was stationed at Barnes Air National Guard Base in Westfield, where he served as Staff SGT. Later, Leonard was employed at Smith and Wesson; and served as Assembly Foreman for Noble Manufacturing. Leonard’s craftsmanship developed steadfastly each day of his life for over fifty years as a self-employed gunsmith. He was known worldwide as a manufacturer of quality reproduction black powder firearms. Leonard was a proud member of the Mass Antique Arms Collectors Club and Seventeenth Century Society. Notably, Leonard loved history and was an avid historian. He was a founding member of the Sixth Mass Continentals participating in the March to Quebec. Leonard was also a historian of the history of the New World and the manufacture and distribution of firearms in the New World. Our Brother, Father, Granddad and Great-Granddad Leonard E. Day Jr. enjoyed sharing the Valley’s History with whomever had interest, he was basically a library of knowledge, there was nothing he couldn’t tell you about the last 400 years. Leonard is survived by his three sons: Leonard E. and Deb Day III of Easthampton, Mark A. and Suzi Day of Ashfield and Jonathon C. Day and Mary May of Haydenville. Seven grandchildren: Aarron Day, Kaileigh (Day) O’Connor, Ashley (Henshaw) Knox, Justin Day, Emily, Madeline and Lucas Day. Six great-grandchildren: Camron and Walter O’Connor, Ryan Day, Danny and Grace Knox, Abel Day. His sisters, Marjorie J. Savino and Judith Quinn both of Florida. Besides his parents, he was pre-deceased by his long-time companion, Betty Fisher Pinto who passed away on November 16, 2013. In lieu of flowers, donations may be made in remembrance of Leonard to; The Fort at No.4, PO BOX 1336 Charlestown, NH 03603. There will be a graveside service at a later date at the Center Cemetery in Westhampton. DROZDAL FUNERAL HOME OF NORTHAMPTON has been entrusted with his services. For more information, please visit Drozdalfuneralhome.com for more information.

Leonard E. Day Jr., 86, of Westhampton, died on May 15th, 2020 of health complications. Leonard was born in Northampton, on July 3, 1933, to the late Leonard E. Sr., and Margaret J. (Shelkey) Day. Leonard was a graduate of Northampton High School.... View Obituary & Service Information

The family of Leonard E. Day created this Life Tributes page to make it easy to share your memories.

Send flowers to the Day family.