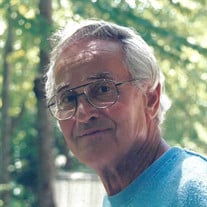 John T. Doppman, 81, of Florence, passed away on Tuesday August 31, 2021, with his loving partner Claudette by his side. He was born in Florence on October 18, 1939, to the late Joseph and Hazel (White) Doppman. He was educated at the former Annunciation Grammar School and went on to St. Michael's High School. He was a veteran having enlisted in the Air Force from 1957-1960. Upon returning from the service, he worked at Doyle's Package Store for 16 years where he learned much about the history of Florence through his associations from the store and even as a young paperboy, acquired a knowledge of the town and its people. If you wanted to know something about Florence, all you had to do was ask John. As a youth, he enjoyed playing ball with his brothers and neighborhood kids. After his employment from Doyle's, he worked for Pro Brush Co. until his retirement in 2007. John and Claudette loved vacationing at Saratoga, betting on the horses and playing at the Saratoga Casino. He also was a boxing and golf enthusiast. He enjoyed gardening, something he learned from his father, most of his life. He was an avid walker who you might see anywhere in town, miles from his home. John lived life simply. Whatever was necessary was all he needed. He was a gem in what sometimes seems like a stark world. He will truly be missed. God Bless You, My Love. John is survived by his devoted girlfriend of 36 years, Claudette Jablonski, of Florence, his daughter Julie Doppman, his brother Richard and his wife Jackie of Conway, and several nieces and nephews. Besides his parents, he was predeceased by his first wife Maddie (Hager) Doppman, and his brothers, James, and Joseph. All of whom he loved. Special thank you to Dr. Parsons, Dr. Serlin and the nurses at CDH and Hospice who cared for John with his illness pulmonary fibrosis. There will be a graveside service on Tuesday, September 7, 2021, at 11 AM at Spring Grove Cemetery in Florence. Followed by Military Honors. Face masks must be worn. DROZDAL FUNERAL HOME of Northampton has been entrusted with his services. In lieu of flowers, donations may be made in John’s name to a charity of one’s choice.

John T. Doppman, 81, of Florence, passed away on Tuesday August 31, 2021, with his loving partner Claudette by his side. He was born in Florence on October 18, 1939, to the late Joseph and Hazel (White) Doppman. He was educated at the former... View Obituary & Service Information

The family of John T. Doppman created this Life Tributes page to make it easy to share your memories.

John T. Doppman, 81, of Florence, passed away on Tuesday August...

Send flowers to the Doppman family.