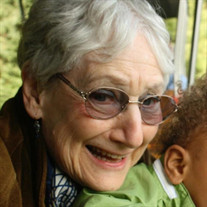 Northampton, MA – Joanne Arlene Appell Freyer, Northampton resident for 30 years, died peacefully in her sleep on June 27th, 2021, just a month after her 91st birthday. Born Joanne Appell, June 3, 1930, in Terre Haute, Indiana, Joanne was a true force of nature. She was a singer and dancer, crowned Miss Terre Haute 1948 and 4th Runner-Up Miss Indiana. While still in her teens, she moved to NYC to pursue her dreams of being a professional performer. Joanne was a chorus line dancer at the Roxy Theater and performed in many summer stock productions. She was never more alive than when she was singing or on stage. Though both born Jewish, she met the love of her life, Kenneth Freyer, on a Christian Science Youth Outing while riding the Staten Island Ferry. Shortly after marrying, they agreed they were not religious people and lived their lives as agnostics. They were married 53 years, still in love when Ken passed away 15 years ago. In 1957, the young couple moved to Port Washington, NY where they had a daughter, Alice, and son, Glen, six years later. Initially a stay-at-home mom, Joanne was devoted to her family. She later worked as a secretary at the local public library and public school system, but she never stopped singing. She performed often at Carnegie Hall with the Collegiate Chorale and acted in local Play Troupe productions. She later sang for years with various groups in the Berkshires including the [email protected] Chorus. Joanne had a great sense of humor and lit up when talking to others. She made the best of any situation and was remarkably content with who she was and what she’d accomplished. She loved the water and the outdoors, but was a New York City gal at heart. She had an incredible sense of direction, literally and figuratively, leading the family through adventures wherever they went. She retained a child-like excitement about people and the world her whole life. Joanne loved interacting with children – the younger the better. She was a devoted grandma and great grandma and is remembered fondly by all. Six years ago, Joanne moved into a lovely assisted living apartment in the Rockridge Retirement Community and later into their memory care community. Despite her cognitive challenges, she remained a strong personality and was cared for warmly and compassionately by the entire staff. Joanne is survived by her two children, Alice Bonner and Glen Freyer, and their families with 3 loving grandchildren, a great grandchild and another one on the way. Donations may be made to either the [email protected] Chorus, 30 North Maple St., Florence, MA 01062, or Rockridge Retirement Community, c/o [email protected]

The family of Joanne A. Freyer created this Life Tributes page to make it easy to share your memories.

Send flowers to the Freyer family.