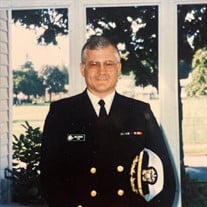 Capt. James Walter Malinoski U.S. Navy (Retired), 75, of Manassas, VA, and Northampton, passed away on Sunday June 12th at Inova Fairfax Hospital in Virginia after a brief illness. He was born in Northampton on May 1, 1947, to the late Walter and Ann (Szepelak) Malinoski. Jim was a graduate of Northampton High School, class of 1965. After high school he attended UMass Amherst, class of 1969, and later received his master’s degree from San Diego University. He enlisted in the United States Navy and worked his way up as a Captain which had made him proud. Jim made the Navy his career and worked as a Radiation Health Physicist till he retired from the NAVY in 2002 after 30 years. He had many hobbies, including traveling, and tending to his beautiful vegetable gardens, which he made sure Barbara planted all the vegetables, while he was in hospital. He was a member of the American Legion Post 10 in Manassas, VA, a member of Fraternal Order of Elks, VA, and was also an associate member of Fraternal Order of Police Lodge. Jim is survived by his wife of 38 years, Barbara (Goodman) Malinoski, his sons; Tim Malinoski of Santee, CA, Scott Baker of N. Attleborough, MA, his daughters, Amie Vollmer of Aylett, VA, and Bethany Otter of San Diego, CA, 10 grandchildren, and 3 great-grandchildren and several dear friends. Besides his parents, he was predeceased by his aunt, Helen Szepelak and daughter-in-law, Rima Malinoski. Calling hours will be Wednesday, June 22nd from 4-6 PM at the DROZDAL FUNERAL HOME of Northampton. Funeral Services will take place Thursday, June 23rd from the Funeral Home at 11:00 AM followed by a Requiem Mass at 12 PM at St. Valentine’s Polish National Church, 127 King St., Northampton. Burial with Military Honors will follow in Holy Trinity Cemetery in Hatfield. In lieu of flowers, donations may be made to St. Valentine’s Polish National Catholic Church, 127 King St., Northampton, MA 01060 or to Dakin Humane Society, PO Box 6307, Springfield, MA 01101.

Capt. James Walter Malinoski U.S. Navy (Retired), 75, of Manassas, VA, and Northampton, passed away on Sunday June 12th at Inova Fairfax Hospital in Virginia after a brief illness. He was born in Northampton on May 1, 1947, to the... View Obituary & Service Information

The family of Capt. James Walter Malinoski U.S. Navy (Ret) created this Life Tributes page to make it easy to share your memories.