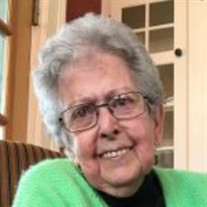 Irene M. Newell, 95, passed away peacefully on Sunday, January 2, 2022, at Linda Manor Nursing Home with family at her side to say goodbye. She was born on September 24, 1926, at the family farm in Bradstreet, Hatfield, and was the youngest of four children to the late Teofil and Mary (Sokol) Harubin. She graduated from Smith Academy, Hatfield, MA (class of 1943) and then completed two years of study at the former Northampton Commercial College. She married Raymond D. Newell Jr. in 1947 During the 1940s, Irene worked as an operator at the Northampton Telephone Exchange (in the good old days of “number please?”). Later, she assisted her husband who owned and operated the Newell Funeral Home and Newell’s Ambulance Service. In later years she and Raymond purchased and operated the LaMontagne Hardware Store in Florence, from which they retired in 1986. Irene grew up in a farm family, helping her parents, sister and brothers manage acres of vegetables and tobacco. She played the accordion and in later years became a masterful basket weaver. She was an avid birdwatcher, and an active and loving great grandmother to Jackson and Alys. She is survived by her son David D. Newell and his wife Virginia, both of Ashfield, MA, and by her grandson Jared D. Newell and his wife Caitlin, both of Bennington, VT (together with their children Jackson D. Newell (ae. 5) and Alys C. Newell (ae.3) whom Irene loved and adored). Irene is also survived by her brother Walter Harubin of Whately, MA., and several nieces and nephews. Besides her parents, Irene was predeceased by her husband Raymond D. Newell Jr. (1998), and by her son Gordon G. Newell (2021), as well as her sister Helen and brother Rupert. A private family service will be held at the Spring Grove Cemetery in Florence. DROZDAL FUNERAL HOME of Northampton has been entrusted with her services. Donations in Irene’s memory may be made to Cooley Dickinson VNA & Hospice, 168 Industrial Dr., Northampton, MA 01060. For more information, or to leave the family a personal condolence, please visit Drozdalfuneralhome.com

Irene M. Newell, 95, passed away peacefully on Sunday, January 2, 2022, at Linda Manor Nursing Home with family at her side to say goodbye. She was born on September 24, 1926, at the family farm in Bradstreet, Hatfield, and was the youngest... View Obituary & Service Information

The family of Irene M. Newell created this Life Tributes page to make it easy to share your memories.

Send flowers to the Newell family.