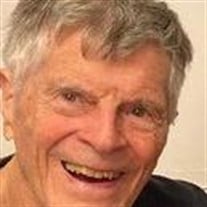 Amherst, MA — Edward W. Westhead passed away from cancer at Cooley-Dickenson Hospital on Tuesday, June 1 at age 90, three weeks shy of his 91 st birthday. A distinguished biochemist, with a passion for learning and broad interests, Ed enjoyed life to its fullest both in the lab and outside his chosen field. He was born in Philadelphia, PA on June 19, 1930 to Edward and Eleanore Westhead, the oldest of five children. He graduated high school from Archmere Academy in Delaware, received his Bachelor of Science (1951) and Masters of Science (1953) from Haverford College, and his PhD in Chemistry from the Polytechnic Institute of Brooklyn (1956). Ed established his own lab at Dartmouth Medical School in the Department of Biochemistry after post-doctoral work at the University of Uppsala and at the University of Minnesota. He was subsequently recruited by the University of Massachusetts, Amherst to form a new Department of Biochemistry (1966) and, later, became the first director of the UMass PhD program in molecular and cellular biology. He held visiting professorship positions at the California Institute of Technology (1971); Oxford University (1972-73); University of Innsbruck (1979-80); and the University of Milan (1987; 1993). His research concentrated on topics in enzyme biochemistry and neurobiology; his work was well-published and he served in numerous professional organizations. He followed developments in his field and kept in touch with former students his entire life. Beyond his work, Ed read broadly, enjoyed concerts and museum shows, and delighted in the interests and achievements of his family and many friends. He loved to travel, seizing any opportunity whether work-related or a personal invitation to visit, and consequently knew people almost everywhere he went. Italy held a special place in his heart; the year he spent with his wife Evelyn in Lucca was one of his fondest times, allowing him to explore his love of history and culture and savor a favorite cuisine. He had an astonishing memory for exceptional food and wine and would travel miles out of his way for a delicious loaf of bread or a dish of homemade ice cream. In his later years he began chronicling his adventures, including a solo trip he made down the Mekong river in Thailand in a foldable kayak in the mid-1950's. Ed was an avid outdoorsman and enjoyed hiking, biking, tennis and skiing up until the last months of his life. A lifelong member of the Appalachian Mountain Club, he volunteered into his eighties on their trail crews, clearing brush and repairing bridges for the upcoming season. He started skiing in the western US at Alta in the 1950's and one of his life's greatest pleasures was qualifying for a free season ski pass there when he turned 80. Ed is survived by his beloved wife of 24 years, Evelyn A. Villa, MD, his daughter Victoria Westhead (John), his son Edward G. Westhead, grandchildren Abby and Nat Levy-Westhead, two sisters, Barbara Lawler (Dan) and Eileen Hall (Bob), and numerous nieces and nephews. He is also survived by six stepchildren: Liz Diton (Jeff), Janet Vanoni (Pete), Karen Shailor (Chris), Mariella Villa (Ryan), Arthur Villa (Jess), and Jason Villa, their children and grandchildren. A celebration of Ed's life will be planned for 2022. Please contact [email protected] or [email protected] if you wish to be notified of the date.

Amherst, MA &#8212; Edward W. Westhead passed away from cancer at Cooley-Dickenson Hospital on Tuesday, June 1 at age 90, three weeks shy of his 91 st birthday. A distinguished biochemist, with a passion for learning and broad interests,... View Obituary & Service Information

The family of Edward Westhead created this Life Tributes page to make it easy to share your memories.

Send flowers to the Westhead family.