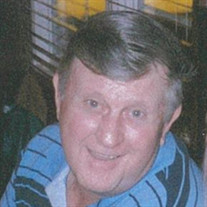 On Valentine’s Day, Sunday, Feb. 14, 2021 Edward W. Kubosiak Sr., loving husband to his wife of 51 years Shirley (Morann) Kubosiak, father of three children and grandfather to six passed away at age 71. Edward was born on Aug. 29, 1949 in Northampton to the late Henry and Rose (Nicpon) Kubosiak Sr. and had attended Smith Vocational High School where he studied auto mechanics. In March 1965 Edward met the love of his life on a blind date at a Sadie Hawkins dance in Ashfield arranged by his best friend, Richard Morann, Shirley’s brother. The theme song of the night, Andy Williams’ Moon River, would be the couple’s love song. Edward and Shirley were married on Nov. 29, 1969 and recently celebrated 51 years of marriage. Ed always felt he had it all. He grew up in a wonderful family, married young to his high school sweetheart, raised three children, and in recent years was able to enjoy spending time with his six grandchildren, whom he adored. In addition to his wife, he leaves his son Edward Kubosiak Jr. of Southampton, his wife Rebecca and grandchildren Alexander and Sophia; daughter Rebecca Goodnow of Goshen, her partner Patrick Horrigan and grandchildren Jennifer, Abigail, Colby and Sawyer; and son Robert Kubosiak of Chesterfield and his wife Jamie. Edward also leaves his sister, Barbara Barker of Northampton, sister-in-law Marylou Kubosiak of Florence, brother-in-law Edward Morann and his wife Sandy, of Plainfield along with his lifelong dear friend and cousin Bill Morann and his wife Verna of Maryland. He also leaves nephews Joseph Barker and Todd Kubosiak, and many cousins. Besides his parents, he was predeceased by his brother Henry Kubosiak Jr., niece Tami Kubosiak and brother-in-law Joseph Barker. Edward worked alongside his father Henry Kubosiak as a heavy equipment operator at Northampton Wrecking Company and demolished several iconic area buildings, including the old Northampton YMCA, during the company’s 25-year history. He also raised hundreds of acres of cucumbers on the family farm in Hatfield, MA, for Oxford Pickle. Most of his career was spent driving trucks for over 40 years for the former Calduwood, Wood Enterprises, BFI and Republic Waste before retiring in 2015. Early in their relationship Edward and Shirley would travel around Western Mass. enjoying live polka music and dancing. Edward would always have polka music playing on weekends. Edward loved spending time fishing and hunting and passed along his love of the outdoors to both his children and grandchildren. The family would spend summer weeks at their camp in Pittsburg, N.H., enjoying trout fishing, hunting, boating, ATV riding, and campfires. He also enjoyed watching his children and grandchildren play sports. He treasured his time outdoors and with family. Ever an optimist, he regularly shared his life philosophy, saying “I think you can have it all, but not all at once. Life is about priorities, and priorities change. You have to live a life that is true to you.” Edward always said the best things in life are free and preached the importance of spending time with family and friends. The family would like to send a special thank you to Hospice Fisher House in Amherst, where staff took excellent care of Edward during his final weeks, and to Joseph and Sue Barker for all of their help assisting Shirley on short-notice during his many times of need. Calling hours will be Saturday, February 20th from 2-4 p.m. at the DROZDAL FUNERAL HOME, 120 Damon Rd., Northampton. A private burial service will be held in the spring where Edward will be buried next to his best friend, Richard Morann, at the Hilltop Cemetery in Plainfield, MA.

The family of Edward W. Kubosiak Sr. created this Life Tributes page to make it easy to share your memories.

Send flowers to the Kubosiak family.