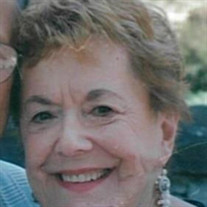 Dolores T. (Madison) Cifarelli, 91, of Northampton, formerly of Chesterfield, passed away on Wednesday April 7, 2021, at the Elaine Center in Hadley. Dolores was born on May 8, 1929, in New York City to the late Joseph and Tecla (Chmielewski) Madison. She attended schools in New York and received her bachelor’s degree from Queens College, CUNY. Dolores met and fell in love with Joseph B. Cifarelli at Our Lady Queen of Peace RC Church in Flushing, New York, where they were married in October of 1950. She and Joseph enjoyed 53 years together before his passing in 2003. Dolores worked in education for 49 years. She was first employed in New York City, and later at Smith College as an administrator before her retirement in 1999. Dolores had a love of animals and would adopt all if she could. She enjoyed reading, writing, cooking, and entertaining at home with family and friends. Dolores was also a communicant of Our Lady of the Hills in Haydenville and was the CCD teacher there for many years. Dolores is survived by her son, Joseph F. Cifarelli and his wife Maria De Paulo of Bangkok, Thailand, her daughter, Marisa Ann Lentner and her husband John Lentner of Chesterfield, three grandsons, Jacob Joseph Lentner of Nashville, TN, SGT Joseph Leo Lentner of Fayetteville, NC, and Matthew Allen Lentner of Chesterfield, and her sister, Charlene F. Madison PhD, of Cummington. A graveside service for Dolores will be held on Tuesday, April 13, 2021, at 10AM at St. Mary’s Cemetery, Haydenville Rd., Leeds. DROZDAL FUNERAL HOME of Northampton has been entrusted with her services. In lieu of flowers, donations may be made to the: The Missionary Sisters of the Sacred Heart of Jesus, 434 W. Deming Place, Chicago, IL, 60614.

Dolores T. (Madison) Cifarelli, 91, of Northampton, formerly of Chesterfield, passed away on Wednesday April 7, 2021, at the Elaine Center in Hadley. Dolores was born on May 8, 1929, in New York City to the late Joseph and Tecla (Chmielewski)... View Obituary & Service Information

The family of Dolores T. Cifarelli created this Life Tributes page to make it easy to share your memories.

Send flowers to the Cifarelli family.