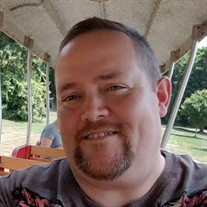 Derek W. O’Brien, 48, of Westfield, passed away on Wednesday, March 3, 2021 at Baystate Medical Center. He was born in Northampton on April 26, 1972 to the late Danny Boyer and Joelle (O’Brien) Thibodo of Westfield. Derek attended Northampton schools and was a graduate of Northampton High School class of 1992. He had various jobs, most recently he was a retail store manager at Dollar General. When he moved to Illinois, he met and fell in love with his one true love, Mary (Smith) O’Brien. They married and together they raised her three beautiful daughters. He always treated them as his own and would always take care of them, even after Mary had passed away in 2014. Reluctantly, he decided he had to move back to Massachusetts, but he would always stay in touch with three girls: Arabella, Evangelina, and Aryanna and would always share his memories of their beautiful mother. Derek was a kind, strong, gentle giant, who would gladly take the shirt of his back for you, a true gentleman at heart. His presence, his vigorous smile and laugh will be sorely missed by all who knew him. Derek is survived by his loving and devoted mother, and best friend, Joelle (O’Brien) Thibodo of Westfield, his girls, Arabella, Evangelina, and Aryanna Adams all of Morrison, Ill., his sisters, Rae Ann Frenette of Florence, Dani Boyer of Fl., several, nieces, nephews, aunts, uncles, cousins, and dear friends. Besides his wife Mary, he was predeceased by his father, Danny Boyer, and his Dad, Ray Thibodo. All services will be private and at the convenience of the family. DROZDAL FUNERAL HOME of Northampton has been entrusted with his care and services. In lieu of flowers, donations may be made in Derek’s memory to Shriners Hospital for Children, 516 Carew St., Springfield, MA 01104. For more information, or to leave a message of personal condolence to the family, please visit Drozdalfuneralhome.com

The family of Derek William O'Brien created this Life Tributes page to make it easy to share your memories.

Send flowers to the O'Brien family.