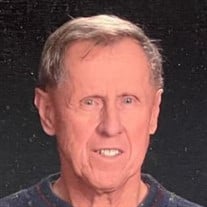 Daniel Edward Breen, 75, of Florence, passed away peacefully at home surrounded by his family after a courageous battle with Alzheimer's disease. Dan was a kind, caring, soft spoken man that will be greatly missed by his family and all that knew him. He was born in Northampton on September 13, 1946, to the late Edward and Lillian (Blanchard) Breen. He was raised in Haydenville, MA and attended elementary and middle school in Williamsburg and later attended Smith Vocational Agricultural High School in Northampton where he studied Auto Body. During this time, he found the love of his life Donna (Start) Breen. Dan knew that Donna was the one and they married just after they graduated from high school. This past year they celebrated their 55th wedding anniversary. Dan was drafted by the United States Army and proudly served his country overseas in the Vietnam war. After he was honorably discharged from the Army, he and Donna would settle in Florence section of Northampton where they raised their three children. Dan would use the mechanical skills that he learned from school at Labbee Auto Body, where he worked until they closed. After their closing he began working for the former Kollmorgan Company, where he painted military optic parts that were used in submarines and other military vehicles. After that, Dan found the job that he would retire from after many years of dedication, working for the City of Northampton in the Department of Public Works. He started as a laborer and quickly moved to different positions including taking care of the city's fire alarm system and all the traffic signals in the city. Dan could be seen mowing the side of the roads in a big blue tractor in the summer and keeping the city streets clear of snow through the winter months. He was a master tradesman and could fix anything. He restored a classic 1966 Ford Mustang to perfection with his son Dan Jr. He could often be found in the garage working on his and his children's vehicle's. He made the perfect home for his family. Fixing anything that was broken, building decks, fixing roofs, and making kitchen cabinets in his wood shop. Dan was a great woodworker and made beautiful furniture over the years including a dining room table that he built with and for his son Andy that he cherishes. His family often called on him to help fix something or guide them on how to go about fixing the problem, he was always happy to help. In his down time, he loved to go camping. He and Donna would spend their time exploring the east coast on many different trips with their camper. They loved camping at Old Orchard Beach in Maine at Bayley's Camping resort and continued to go there until the most recent years. Cape Cod was their second choice. They started going there when the kids were young, making the trip in the early morning to get the best spot at Nickerson State Park in the town of Brewster, MA. They would often go on cruises to different destinations in the Caribbean. He enjoyed watching NASCAR and Indy car racing, his favorite driver being AJ Foyt. He loved his three granddaughters very much and would attend all their activities. He was very proud of their accomplishments and could often be heard telling everyone about those accomplishments. He leaves his loving wife Donna (Start) Breen of 55 Years and their three children, Melissa Garriepy and her husband John of Huntington, and their three children Krista of Amityville, NY, Allison of Chicopee, and Jessica of Huntington. His son Daniel Breen Jr. of Middletown, RI, and his youngest son, Andrew, and his wife Carol (Jerome) Breen of Whately, MA. His sister Madelyn Breen of Haydenville, his brother Robert "Bobby" Breen of Florence, sister, Mary Dusseault and her husband Robert of Florence, and brother Thomas "Tommy" Breen and his wife Mary of Whately, several nieces, nephews, and many sisters and brother-in -laws, and his best friend, Elmo "Hass" Hassell of Columbia, NC. Calling hours will be Friday, January 21, 2022, from 9AM-11AM at the DROZDAL FUNERAL HOME, 120 Damon Rd., Northampton. There will be a religious service at 11AM followed by Military Honors in the funeral home. Burial will be at the convenience of the family. In lieu of flowers, donations may be made in Dan's memory to, Alzheimer's Association, 309 Waverley Oaks Rd, Waltham, MA 02452 or to VNA/Hospice of Cooley Dickinson, 168 Industrial Drive, Northampton, MA 01060. Per order of Northampton Board of Health, face coverings are required. For more information or to leave the family a personal condolence, please visit Drozdalfuneralhome.com

Daniel Edward Breen, 75, of Florence, passed away peacefully at home surrounded by his family after a courageous battle with Alzheimer's disease. Dan was a kind, caring, soft spoken man that will be greatly missed by his family and all that... View Obituary & Service Information

The family of Daniel Edward Breen created this Life Tributes page to make it easy to share your memories.

Send flowers to the Breen family.