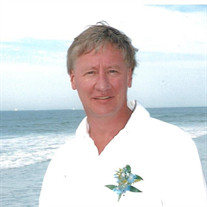 Charles “Chuck” W. Novotny, 59, of Orange, passed away unexpectedly on Saturday October 31, 2020 at Athol Memorial Hospital. He was born February 8, 1961 in Northampton to the late Gerald Novotny and to Maureen (Hillman) Spencer. Chuck was a graduate of Smith Vocation High School and later went on to receive a master’s degree in business from Western New England College. He was a retired Chief Petty Officer of the United States Coast Guard, Chuck was mostly proud as being a rescue swimmer, and for the service of his country. After the service, he received a job as a Construction Analyst for GSA where he worked for several years. Chuck was known for being very talented, especially with his carpentry skills. Chuck and his wife Dianne would renovate old homes, after the work was done, they would throw large BBQ and pool parties for all their friends and family to enjoy. He liked playing Keno, going on casino trips, singing karaoke, and riding his Harley trike. Chuck embraced life; he was always that kind doting man who will be sorely missed by all who knew him. He was a life member of Mars VFW Post 7505 in PA, member of the American Legion Post 34 in Plaistow, NH, and I.O.S (Independent Order of Scalper) “Red Wolf” of Montague. He is survived by his loving wife; Dianne (Reil) Novotny of Orange, his mother; Maureen (Hillman) Spencer of Florence, his children; Christine Novotny of Southwick, Jessica Novotny and fiancée, Melissa Lyons of Easthampton, stepchildren; Steele Kott and his wife Amy of Easthampton, Brittany Kott, and Olivia Stankowski both of Easthampton, and Abigail Stankowski of Orange, grandsons; Lucas Laclair, Nathyn Novotny both of Easthampton, his brothers; Michael and Thomas both of Northampton, his sisters; Linda Herfurth of Florence, Ann White and her husband Mike of Chesterfield, Susan Hogan and her husband Francis of Williamsburg, brothers-in-law; Ron, Greg and Jeremy and his wife Anna Reil, sisters-in-law; Rhonda Gero, Laurie Pelott and her husband Ted, several nieces, nephews, friends, and his “beloved boys”, Tucker and Whiskey. Besides his father, he was predeceased by his in-laws, Herbert and Dorothy Reil, and Deborah and Dennis Reil. Calling hours will be Thursday, November 5th from 4-6PM at DROZDAL FUNERAL HOME, 120 Damon Rd., Northampton, MA. Funeral will be Friday, November 6th at Drozdal Funeral Home at 10:30AM, a prayer service will begin at 11AM officiated by Fr. Richard Bondi. Burial will be private and in the Massachusetts Veterans Memorial Cemetery in Agawam. In lieu of flowers, donations may be made in Chuck’s name to: MSPCA-Angell, Attn: Donations 350 South Huntington Ave. Boston, MA 02130 Due to Covid-19, masks and social distancing are required at all times. For more information, or to leave a message of personal condolence please visit Drozdalfuneralhome.com

Charles &#8220;Chuck&#8221; W. Novotny, 59, of Orange, passed away unexpectedly on Saturday October 31, 2020 at Athol Memorial Hospital. He was born February 8, 1961 in Northampton to the late Gerald Novotny and to Maureen (Hillman) Spencer.... View Obituary & Service Information

The family of Charles "Chuck" W. Novotny created this Life Tributes page to make it easy to share your memories.

Send flowers to the Novotny family.