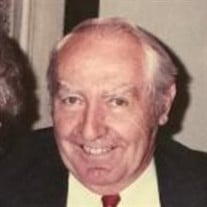 Carl Kuzontkoski was reunited with his wife Phyllis on June 16, 2020, ten days prior to his 93rd birthday. In his family, Carl was the last surviving member of his generation, a loving and devoted husband, father, and grandfather; a compassionate friend, and a man who would gladly offer a joke or story to all who would listen. Born to Charles and Florence Kuzontkoski, immigrants from Bialystok, Poland, Carl grew up in Whately, MA. He and his twin sister Carolyn were the youngest of eight siblings, including Chester, Walter, Ann, Joe, Jennie, and Charley. After graduating with a certificate in automotive mechanics from Smith Vocational School, he served in the U.S. Navy during WWII. He was particularly proud of his excellent marksmanship, a skill honed over many years as a deer hunter with his brother, Chet, and his nephews, Carl and Chet. He loved to fish and forage for mushrooms, which he often did with his younger daughter, Paula. Shortly before enlisting, he met the love of his life, Phyllis Zembiski, at a lawn party. He loved to tell the story about how his future mother-in-law, Sophie, encouraged her daughter to date "that nice Polish boy." They married in July 1947, and remained devoted to each other until Phyllis' death, 70 years later. He began his career as a mechanic with Hartwin Motors, and ultimately became co-owner of his own service centers, K & L with Albert Labbee, and later, C & L with Larry Flynn. Although a keen businessman, his compassion frequently led him to reduce or eliminate the bills of struggling customers. Family, friends, and faith formed the foundation of Carl’s life. As a Eucharistic Minister, he served his church. As a friend, you couldn’t ask for anyone better. At home, Carl selflessly tended to his wife for the last ten years of her life. He was unabashedly proud of the achievements of his daughter, Carolyn Iacovone, and her husband Robert of West Boylston; his daughter, Paula Kuzontkoski, and her husband Juan Pablo Fernández of Boston; his grandsons Matthew Iacovone and Christopher Knittle, and Christopher's wife Jessica, and looked forward to video chats and updated photos of his great-grandson, Zander Knittle. He frequently reminisced about time spent with best friends, Clara and Jackie Shea, vacations in Maine, his love of cooking, his vegetable and flower gardens, and “polka” cruises with Happy Louie and his band. After his beloved wife passed on in 2017, he moved to Christopher House in Worcester, MA to be closer to his daughters and their families. He was also adored and 'adopted' by many nieces, nephews, and friends who called him "Uncle Carl" or "Dad." Many thanks to the compassionate staff of the Belmont unit of Christopher House, and to all those who visited or sent cards and prayers. Carl lives on in the values he instilled in and bestowed on his family and friends: kindness, love, hard work, honesty, compassion, generosity, and most of all, laughter. Calling hours will be at DROZDAL FUNERAL HOME, 120 Damon Road, Northampton, MA, Monday, June 22, from 9:30 am to 10:30 am. A Liturgy of Christian Burial will take place at 11:00 am at Our Lady of Grace, 11 School Street, Hatfield. Burial will follow in Calvary Cemetery, Hatfield. Due to COVID-19 restrictions, the funeral Mass and burial are by invitation only. In Carl's honor, donations can be made to Christopher House, 10 Mary Scano Drive, Worcester, MA 01605 or to a charity of one’s choice. For more information, please visit Drozdalfuneralhome.com

Carl Kuzontkoski was reunited with his wife Phyllis on June 16, 2020, ten days prior to his 93rd birthday. In his family, Carl was the last surviving member of his generation, a loving and devoted husband, father, and grandfather; a compassionate... View Obituary & Service Information

The family of Carl Kuzontkoski created this Life Tributes page to make it easy to share your memories.

Carl Kuzontkoski was reunited with his wife Phyllis on June 16,...

Send flowers to the Kuzontkoski family.